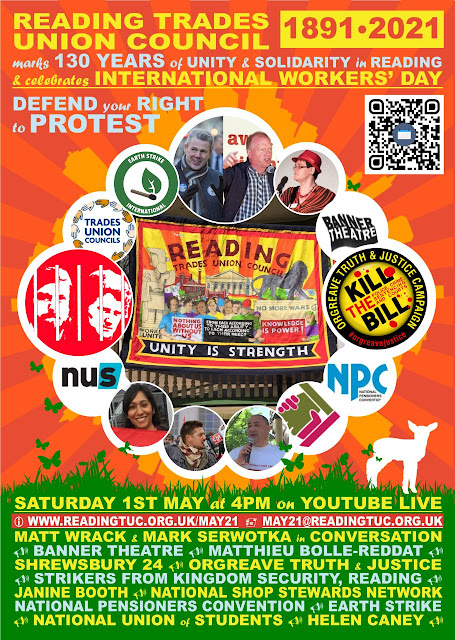 Undeterred by the lockdown imposed by the horrific COVID19 pandemic, Reading Trades Union Council organised a May Day spectacular to raise the spirits of comradeship across the local labour movement and beyond. Adhering to the strictures of public health advice - social distancing and limitations to face-to-face events - the event was staged online with a feed direct to YouTube. Given that 2021 is the 130th anniversary of RTUC, there was a real enthusiasm to make this year's International Workers' Day one to remember!
In the spirit of both May Day and Reading's multicultural heritage, the event was beautifully diverse, with speakers and performers from Reading, elsewhere in Britain and from abroad. Through the support of the production team at Banner Theatre, the presentations wove smoothly one into another and were interspersed with topical tunes.
The roster of featured attendees is one to be proud of, from heads of national trade unions and spearheads of justice campaigns to frontline activists and radical performers:
The creative and logistical energy which developed the brainstorming sessions into the finished two-hour tour de force emanated from the RTUC May Day Organising Committee: Neil Adams (Unite), James Denny (RMT), Chris Reilly (RMT) and Tanya Wills (Unite). For the production of the broadcast event, thanks go to Banner Theatre. Details of the recorded version will be published here in due course.
Reading Trades Union Council would like to thank our affiliate trade unions for the support, both financial and by way of providing contributors to the event.  While significant donations from the RMT and Unite gave the making of our May Day event real impetus, many other donations and support in other forms demonstrated broad solidarity. The support received shows the broad comradeship of organised labour - and the recorded version of the event will form part of its legacy. 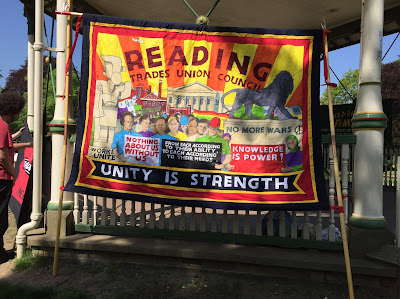